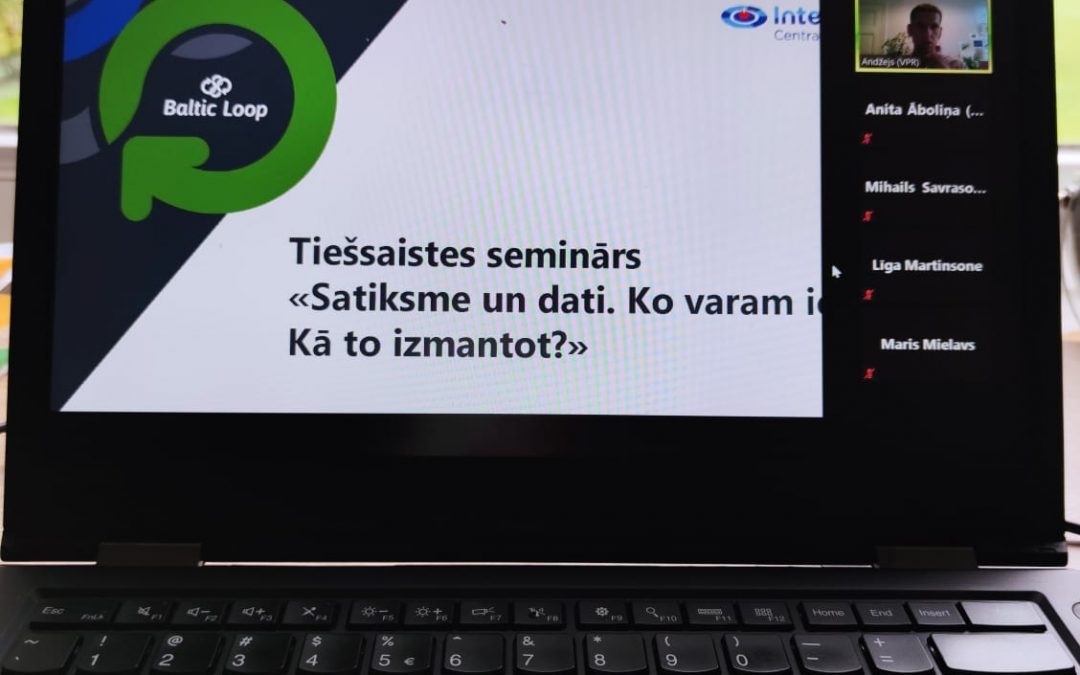 On September 15, Vidzeme Planning Region organized an online seminar “TRAFFIC AND DATA. What can we get? How to use it?” to update the importance of data in the development of the transport sector, as well as to outline how it is practically possible to obtain data, how to collect it, and how to use it meaningfully. The online workshop brought together around 50 participants who had the opportunity to hear the experiences of four knowledgeable industry professionals on the possibilities of using the data.

The seminar was organized within the framework of the Baltic Loop project.

It’s all about data available in a portable format

Mikus Jēkabsons (Public Services Department), a representative of the Ministry of Environmental Protection and Regional Development, emphasized that data is an increasingly important resource. He reminded once again what open data is and in what formats it can be found. The data is used by a very wide range of professionals, from journalists and researchers to entrepreneurs to develop new products and services, as well as to enable institutions to work more efficiently, including to save money. A broader insight into the opportunities provided by the open data portal data.gov.lv was provided. M. Jēkabsons has observed that both state institutions and local governments often lack an understanding of how to distinguish data (for example, local government budget by sectors) from information (for example, minutes of local government council meetings) and what is really open data (data in machine-readable format, provided to the public).

Decisions should not be based on intuition

Mihails Savrasovs (Faculty of Computer Science and Information Technology, Transport and Telecommunication Institute in Latvia) spoke about the possibilities of data modeling, revealing how to make better use of data, in what levels of detail they can be viewed. “Modeling is a powerful tool that allows you to analyze complex systems and make data-based decisions,” Savrasov said, calling for intuition-free decisions.
M.Savrasov has also concluded that modeling is only a tool because everything is based on data and their level of detail. This is one of the problems that prevent the full potential of the data from being realized.
Continuing, the expert pointed out the paradox – although information and communication technologies are constantly evolving and
new data sets are available, but many of them are still not publicly available on the grounds of trade secrets or personal data protection regulation. This is a problem that needs to be addressed.

Missing data can also be generated by the population

Nika Aleksejeva from the association “Data School” briefly outlined the goals of the organization and told about the potential of citizen participation in creating new data that is currently missing for the industry. In order to get people to respond, it is important to be able to convince them that participation is not just formal, that it is followed by feedback – a positive stimulus, such as solving a problem identified by the citizen or sorting out an identified problem area. N. Aleksejeva told in more detail about the course of the previously implemented project “Bicycle Data”, within the framework of which the load of bicycle lanes in Riga was studied with the active involvement of the society. Currently, another project is being implemented – “Veloslazdi”, which, by involving cyclists, allows to identify the shortcomings of the bicycle infrastructure in the city. As of May 1, 2020, 950 bicycle traps have been reported. The problems are compiled and submitted to the Riga City Council Traffic Department for resolution, while volunteer enthusiasts later inspect the sites to see if the problem has been resolved. N. Aleksejeva points out: “Nowadays, technically anyone can implement this type of platform project. The question is: who will give the data, what will happen to the data afterwards, will the delivery of the data make sense, is the expected result clear and will there be feedback? ”

Māris Mielavs, Head of Jelgava City Municipality Institution “Pilsētsaimniecība” and Māris Skudra, Head of Infrastructure Management Systems Division of “Pilsētsaimniecība” spoke about the opportunities that allow the development of modern cities, revealing how traffic data is obtained and used in Jelgava urban development planning.
Seven types of data storage tools are used in the city of Jelgava. The various systems allow access to accurate data (eg traffic volume, intensity, speed, trajectories) at any time and place, successfully addressing the limited capacity of human resources and at the same time saving municipal funds. One example is a sensor built into the carriageway that, in response to a magnetic field generated by a car, provides information on the number of cars that are later used to model flow rates and optimize traffic light signaling to improve intersection permeability. Such activities need to be carried out, for example, at the start of a new school year, when significantly more vehicles appear on the streets in the morning and afternoon.
Vehicle counting and classification equipment not only collects data but also helps to address safety issues, as it often helps to identify the causes of accidents, identify culprits and make infrastructure improvements when needed in a given situation to avoid future accidents.
The attendees were especially interested in the meteorological stations installed in the city of Jelgava, which help to predict the possibility of black ice, allowing to plan the treatment of the road surface in time.